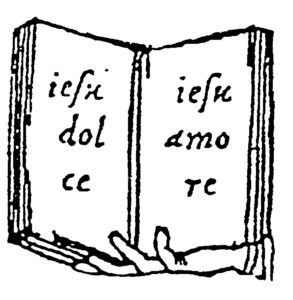 The Edizioni Santa Caterina publishing project was set up by the College, which has organized and promoted cultural events and conventions ever since its foundation.
Edizioni Santa Caterina publishes exhibition catalogues, convention deeds, and texts of for historical, literary, biomedical and legal-social studies, held at the College or the Residence.
Also published is the series “Quaderni del Master di editoria”, volumes created, produced and promoted by the master’s students under the guidance of teaching staff.

The Edizioni Santa Caterina project combines a wish to promote the culture of publishing, literature, art and science with a desire for innovation.  An idea represented by its logo, a detail from a wood engraving contained in the Epistole devotissime de Sancta Catharina da Siena, a book printed in 1500 in Venice by Aldo Manuzio, the greatest printer of the time and the first publisher in a modern sense. In the wood engraving, St. Catherine – to whom the College is dedicated – holds a book in her hand, bearing the first words ever to be printed in italics. Indeed, this wood engraving features the very first use of this font – which takes its name from the fact it was designed in Italy – in the history of publishing.